Cosplay, Being James Bond, And A Theory Of Watch Collecting

Cosplay, Being James Bond, And A Theory Of Watch Collecting

Cyberpunk godfather William Gibson, and being James Bond – or his boss.

Way back in 1999, William Gibson – one of the founding fathers of the sci-fi genre called cyberpunk – wrote a story for Wired which I’ve read many times over the years, not because it’s an exercise in nostalgia, but because it’s still eerily apropos if you’re a watch enthusiast. The story’s called, pithily enough, “My Obsession,” but among watch enthusiasts, it’s best known for Gibson’s notion of “The Tamagotchi Gesture.”

“Obsession” is apt. The story is is a personal history – an horological bildungsroman if you will – of the growth of one man’s obsession with mechanical watches, which, says Gibson, are lovable because, like the love-them-or-they-die digital pets called tamagotchi, they need attention and care. He wrote, of watches, “They’re pointless in a peculiarly needful way; they’re comforting precisely because they require tending.”

That’s a big part of the pleasure of mechanical watches, but not the only part. To the Tamagotchi Gesture, I would like to add one more phrase to the lexicon of horological justification – the Cosplay Effect.

The Joy Of Let’s Pretend

Cosplay and its sibling, LARPing, are byproducts of the universalization of otaku communities, which are groups of people brought together by an unhealthy obsession with people and places that never existed. Otaku is a Japanese term that started out referring to someone who is too wrapped up in anime and manga for their own good. It originally had slightly pejorative connotations – think the Comic Book Guy in The Simpsons – but nerd culture has come a long way. Even watch-nerds have gone mainstream.

“Cosplay” means getting dressed up in a costume (costume + play) drawn from whatever fictional universe you obsess over. It’s Halloween, but with no age limit, no cost limit (highly detailed cosplay outfits can cost the maker thousands of dollars in supplies and hundreds of hours of construction time) and most especially, no payoff – nobody goes home with a bag of candy for cosplaying. What you do get, if you’re good at it, is the admiration of your fellow otaku – the warm glow one only gets from good old-fashioned creative effort, combined with recognition from your tribe.

LARPing combines cosplaying with another perennial and now somewhat normalized nerd favorite – the fantasy roleplaying game. LARPing is Live Action Roleplaying – instead of playing on a computer (or gameboard, if you’re old school) you dress up as a warrior or wizard, and wander the countryside pretending to battle monsters and search for treasure (and, probably, hoping you don’t get arrested for disturbing the peace).

It can take on many forms – one of my faves is Quidditch LARPing, from the Harry Potter universe. On fine days you can actually see people astride broomsticks, running around East River Park here in New York, chasing a Golden Snitch, and enjoying the most fun part of LARPing, which is arguing about the rules (zero-stakes but nonetheless vehement disagreement is of course, a highly characteristic feature of the watch world, as well).

I don’t cosplay and I don’t LARP (though I did as a kid, like most kids) at least not so anyone would notice, but there is, indisputably, an aspect of both when it comes to what makes a particular watch interesting to me, and I bet some of you, too.

The first watch I can ever remember seeing, and wanting to own, was the Omega Speedmaster Professional and while it’s probably difficult for newcomers to watch collecting to understand today, having a watch that astronauts were using was about the coolest thing to which a kid could aspire, once upon a time. Roughly at the same time – mostly, the 1960s – there was no shortage of watches that touched other cool worlds; automotive, aviation, you name it. But there was nothing that could touch space travel and even the lowliest lunchbox tie-in, the Space Food Stick, was space-travel-adjacent enough to kick Twinkies and Dolly Madison cupcakes out of brown paper bags nation-wide. 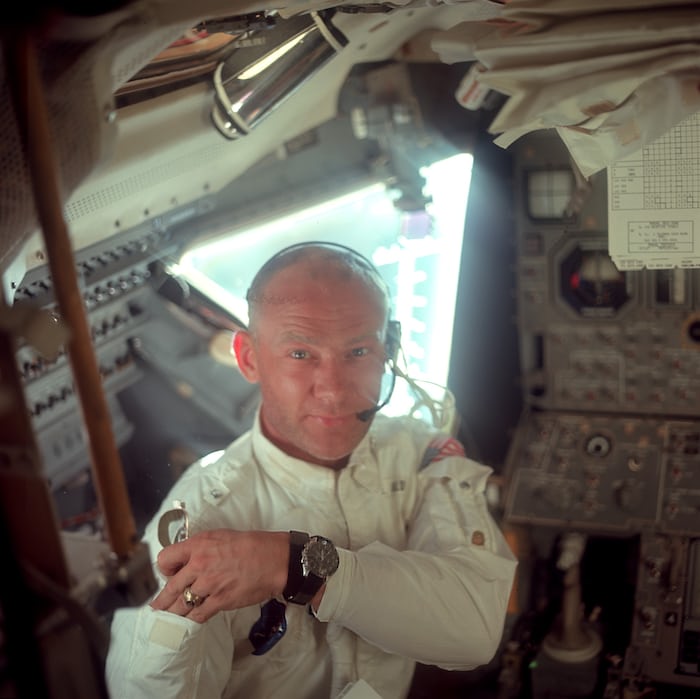 Buzz Aldrin with the Omega Speedmaster Professional, on the lunar surface.

People buying Speedmasters nowadays are increasingly too young to remember the Apollo program, but while the Speedmaster is no longer currently a Moonwatch, it’s still closely enough linked to crewed space missions for the connection to factor into the Speedmaster’s public image. Certainly it scratched the astronaut itch for Jeff Bezos. You could say a lot about the first crewed flight of Blue Origin, but it’s at least partly one of the most expensive examples of LARPing in history.

Pilot’s watches in current collections frequently mimic the look of cockpit instruments in a way not entirely consistent with simplicity and purity of design, per se, but for the target audience this is less important than how much the watch evokes the spirit of the Wild Blue Yonder. The altimeter-style date window is a perfect case in point.

Watches can let us cosplay, not just as real-world professionals we admire, but as fictional characters we like, too. Take Bond – James Bond. The nice thing about cosplaying as Bond is that horologically, the books and movies have made it reasonably easy for us – there are of course, vintage Rolex and nowadays, Omega watches that fit the bill. I say cosplaying specifically, because being James Bond from a LARPing rather than a cosplay perspective is an expensive undertaking – in Casino Royale, Vesper Lynd gives Bond a budget of ten million pounds for a game of baccarat, with another five million in reserve if she deems it a prudent investment. (James Bond’s been such an effective ambassador for dive watches that Jason Heaton’s been able to write about “The James Bond effect.“)

The watch that launched a thousand auctions: Bond’s 6538, as seen in Thunderball, 1965

Most of us 007 wannabees are not guaranteed that kind of bankroll, so cosplaying Bond with your favorite Rolex or Omega, rather than LARPing in your Montenegrin casino of choice, is definitely more affordable, or it used to be, before vintage Rolex went bananas. A horologically inclined 007 on a budget would be well-advised to consider the perfectly nice and much more sub-rosa Gruen Precision that Bond wears when chatting up Sylvia Trench, in the casino scene at the top of Dr. No. Or, for that matter, one of the Bond Seikos worn by Roger Moore (albeit the degree to which the Moore-era bond veers into self-parody may make this less appealing. The name Octopussy is so dumb it hurts to type it – my god, The Spy Who Shagged Me looks positively Shakespearean by comparison).

A lot of us start by wanting to know what’s cool and adopting whatever’s trending. We’ve all been there – oh, Hawaiian shirts with a bespoke suit are cool now (yes, I know it’s a thing, and yes, I find it inexplicable); a steel sports watch is cool now … the list is long. Bond is certainly cool, adjusted for a certain definition of cool. At some point, however, you may wish to stop doing somewhat predictable watch cosplay, and follow a road less traveled.

Which brings me to an irritable ex-Royal Navy officer named M.

“I respect any nation that keeps its trains clean and copes with the beatnik problem, like the Swiss.”

– M, ON HER MAJESTY’S SECRET SERVICE

In the words of the sadly defunct Bond fan website, the Commander’s Club, “When 007-ship begins to strike you as too strenuous, too expensive, or (above all) too juvenile a pursuit, the time has come to switch to M-ship. The biggest change you’ll notice is that you follow your new role more or less for its own sake.”

M is James Bond’s boss, in both the books and the films. Bond, of course is everyone’s favorite aspirational superspy, albeit Bond, especially in the books, has what by modern standards of propriety, humanity, common decency, and indeed, general physical health, are somewhat questionable personal tastes and practices. Half a bottle of hard liquor a day and fifty cigarettes – who does he think he is, Keith Richards? M, on the other hand, disdains such indulgences.

So, then, cosplaying as M. M regards public demonstrations of everything from virility (M has no sex life, and I bet he approves of Bond’s operationally insecure dalliances as little as Don Corleone approved of Sonny’s) to wealth, to notoriety or fame, as out of bounds professionally, but also, and more significantly, objectionable in terms of personal tastes. M drives a Rolls in the novels but you definitely get the impression that this is more out of patriotism and a slightly reactionary character than out of any desire to show off. (LARPing as M, as opposed to cosplaying, is a little more involved but certainly less dangerous and expensive than doing it as Bond, though you’ll need a few things, like a pipe, a bowtie, and an empty artillery shell you use to hold your tobacco).

You might wear a Patek, but I think it is probably more likely that at least the literary M has a Smiths or, equally plausibly, a Longines or Omega, time-only – if it is something gold, it’s possibly something he picked up while working under cover on Le Continong more for its gold trade value than anything else. Just remember that whatever you pick, if you’re looking to cosplay the M of the books or the Sean Connery era, that it should be consistent with the personality of a man who says things like, “I respect any nation that keeps its trains clean and copes with the beatnik problem, like the Swiss.” (Source: On Her Majesty’s Secret Service.)

M is probably the least likely person in the world to care about quote brand equity unquote. It’s possible that M, if he wore a watch at all, would wear something inherited from a predecessor. I like the theory that like “James Bond,” M is a title, not a person. If so, then pass down the watch, along with the green ink, from one M to the next – a battered steel-cased Omega pocket watch (Omeeega?) would do nicely.

L-R, Lois Maxwell as Moneypenny, Bernard Lee as M, and Sean Connery as 007, From Russia With Love, 1963. Image, Alamy

Or, very possibly, nothing … considering that M seems to never go anywhere other than his office, his club, and his home, he’s likely never further from a mantel clock than a dozen yards.

I think it says something about M’s complete disregard for what anyone thinks that while there are more lists of Bond’s watches than stars in a clear night sky, there is little if any information on what M wore. For M to have any sort of sentimental attachment to an object like a watch seems prima facie absurd. But could it be that he is the sort of gent who would find, in watches, a safe outlet for passions which he has otherwise apparently permanently extirpated from his outer and inner lives? Is there a secret room in his home (and heart) where the ticking of his prized possessions, as alive for him as any tamagotchi is to a child, gives him what passes in his life for a companionship – a quantum of solace, as it were? Does anyone have any idea? What the hell does M wear?

Grails: How The Rolex Explorer 1016 Became My Rite of Passage

An In-Depth Look At The Calibre Heuer 02, Plus 12 New TAG Heuer Chronographs

A Letter From Our Founder, Hamilton Powell

What Even Is A Tool Watch, Anyway?

What Even Is A Tool Watch, Anyway? Six watches, six different

Managing Your Watch Collection With HODINKEE Insurance Is Easy